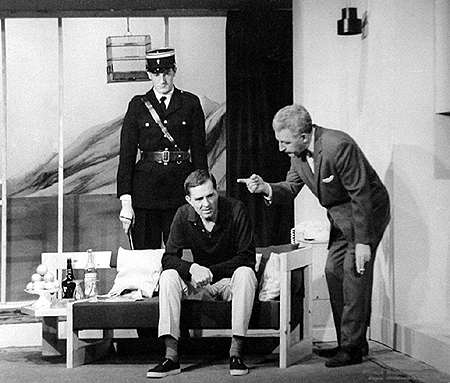 There are many people who have made significant contributions to the Loft across its history and Denis Hunt is certainly one of them.

It is with great sadness that we announce his death on 25th February 2022. A hugely influential and key actor and director at the Loft, who also undertook many theatre administrative roles with immense energy and verve!

Denis was at the centre of the beating heart of the theatre, in partnership with Bob Collingridge the Artistic Director, and in the thick of it at critical moments in the Loft’s history.

He was part of the cast of Alice in Wonderland in 1958 playing the Mad Hatter when in the afternoon of the opening night of 9th January there was a serious fire at the Loft’s colonnade home; the first of two in the history of the theatre. As firemen fought to control the blaze, the headmaster of Leamington Boys’ College offered the school’s Assembly Hall as a performance space, and the Shakespeare Memorial Theatre, Stratford, and Birmingham’s Crescent Theatre came forward with offers of costumes and props. At 7:30 pm that evening, the production opened and was attended by a hugely supportive audience of 150. The show had indeed gone on.

He was also at the decision making centre of the rebuilding of the Loft after the second more serious fire and enormously proud of the finished building coming in on an impressively tight budget.

He loved contemporary plays – particularly Pinter – appearing in three of his plays, ‘The Homecoming’, ‘The Birthday Party’ and ‘The Caretaker’ He was so proud of the Loft being at the forefront of staging Pinter plays in the non professional theatre.

Denis was the kind of person who epitomised that sentiment of the show needing to go on. In his professional working life he was a senior Director of the engineering company Trelawney and as a Director in the theatre he brought the same professional approach. He was uncompromising, exacting and worked at speed. He set high professional standards and expected those standards from everyone he worked with. If a rehearsal started at 7.30 p.m. then he expected the cast and crew to be ready to start at that time, not just arriving in the building. When you were in a play directed by Denis you were on time!

He was fun, he loved a party and he was hugely knowledgeable about every aspect of theatre. We had many fabulous dinner parties together. I remember crying with laughter. His stories of theatre were plentiful, outrageous and unique. Essentially Denis. Unforgettable. The end of an era.