It is with great sadness that we announce the death of Madeline Gorrill who for many years was Wardrobe Mistress at The Loft.

Madeline first got involved with the Loft in 1957 with a play called ‘Life with Father’.  She assisted with costumes for the production.  They needed a wedding dress for an actress and the only one available did not suit, so Madeline used a plain cream Edwardian dress, scattered single velvet parma violets over the skirt and train and trimmed the bodice and sleeves with narrow violet ribbon.

Her work began in earnest as assistant to Wardrobe Mistress Maureen Davis in 1959, after the first fire, when we started to make many of our costumes, designed by Mary Varcoe from the RSC.  Madeline had a team of seamstresses, who were superbly talented, making costumes, hats and parasols for period plays, often cutting and making simply from a sketch. Mary Varcoe taught Madeline and the team much about how to made costumes look authentic, to age them and dirty down material. She was so sad that nearly all of these beautifully made costumes were lost in the second fire. 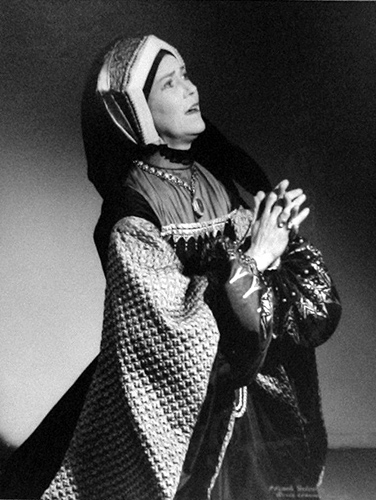 It was at that stage that Madeline became Wardrobe Mistress and began the painstaking work to rebuild the stock, the RSC in particular gifting us many costumes they could no long use. Madeline’s standards were high.  She always felt that stage costumes should be just as well made as street clothes.  She also  ran a hugely successful costume hiring business at the theatre on a Friday evening, but under strict conditions.  The hirers had to be other theatre companies.  No fancy dress party hiring was allowed!

Madeline retired in 1987 after 30 years of contribution in the wardrobe and the management team. She also appeared in four Loft productions in non speaking roles. She did stay connected with us and worked on the occasional play to help out.  Her husband Philip worked on set design and construction and was a big part of theatre during those years.

Madeline spent her last year or so in a nursing home after the death of Philip in 2017, whom she missed so much. We send our love and thanks and fond memories to her son Duncan and the family.

The funeral service is at The Vale Crematorium at Pershore on Monday 1st March 2021 at 4pm. Madeline’s family will be having a private service due to Covid restrictions.